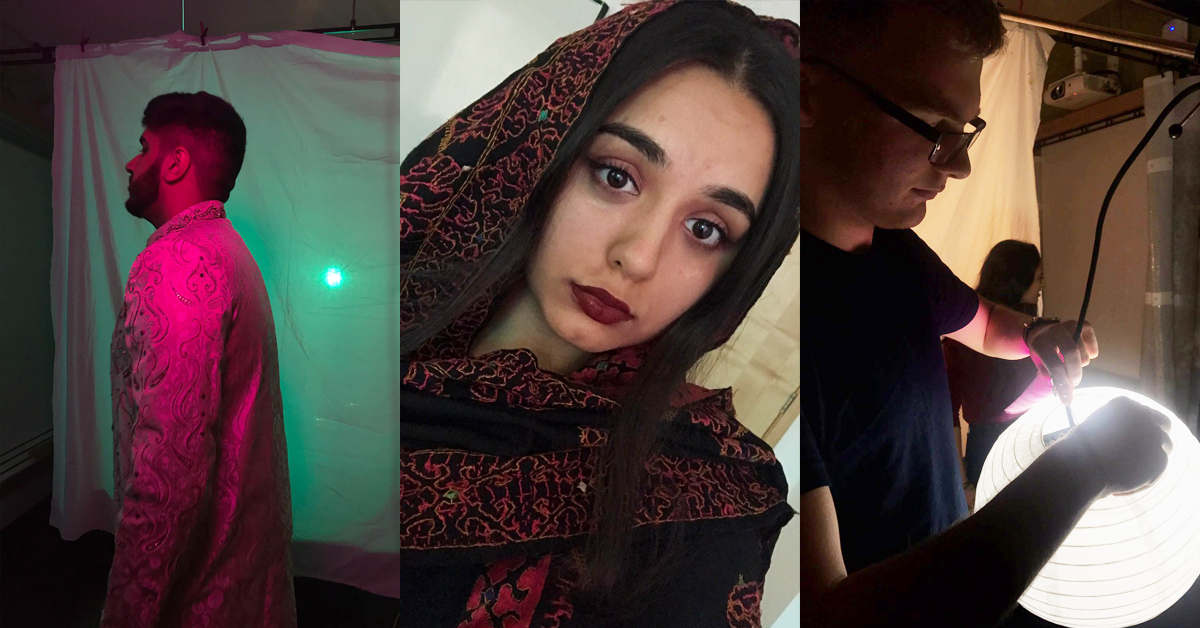 Annusheh Rahim is a gap year student who is out to pursue her passion of filmmaking. Despite the fact that her current qualifications are not linked to film production in any way she has grabbed the opportunity to make her directorial debut. Fellow festival volunteer Sabita caught up with Annusheh to find out more about the promotional video she directed for the UK Asian Film Festival (UKAFF).

How did this opportunity come to you?
It all started when I signed up to be a volunteer for UKAFF and Tongues on Fire. I initially just signed up to be an artist liaison and a general volunteer, because I thought I could gain some valuable experience working at a film festival. After meeting and getting to know such wonderful people who came from all walks of life, but all having our history and heritage in common, I got inspired to create something of my own for this festival. I asked the festival manager for permission to shoot a short promotional video, which I’d already envisioned in my head, and as soon as I got the permission I just went for it!

What was your thought process behind the making of Final Cut:
The UKAFF focuses on South Asian culture, which I feel is underrepresented in western media. Often we’re not seen as real and full beings as our own – we’re either a punchline, a stereotype, or a device used to further other people’s stories; but rarely our own. I wanted to visually celebrate a lot of the beauty and experiences that South Asian people experience through storytelling – but I was careful not to romanticise it, or gloss over the very real problems we have.

Did you focus on a specific theme?
Although the video is only two minutes long, I wanted the video to tell as many stories as possible, so there are many themes I have attempted to cover. One clear theme of course, was the F rated symbol – for those who don’t know, F rated stands for a strong focus on feminist issues and the female experience – so the faces you saw were predominantly female.

The first half of the video introduces the festival and the individuals who are more passive at the beginning – they’re either looking into the camera, or standing still. The music, which is the official festival music, builds up more and more throughout. After the bangle dropped, which I saw as the change in the video, it’s almost as if they came to life. After that there were shots which symbolised rebellion, celebration, retaliation, and self empowerment. As the company behind the festival is called Tongues on Fire, we try to talk about issues that people are scared to.

During last year’s festival the film, Lipstick Under My Burkha gained a lot of publicity and recognition for promoting women who wish to take control of their lives, and is still being shown today. I did (try) to allude to it, with the shot of the two girls wiping off their lipstick. (Although it sounds kind of contradictory, because of course that movie explored ideas of allowing femininity in a conservative world, I tried showing how femininity can come in so many different forms – and you don’t need makeup or anything like that to be a woman.

This helps the audience connect with the main theme of the festival – female related issues but it also highlights a previously successful film which was celebrated at the festival a year before and helps draw in the attention of the audience for the forthcoming festival.

How did you represent the South Asian culture in your video?

All the props we used are easily identifiable with the South Asian culture. Items of jewellery such as bangles and rings were used to illustrate how the South Asian culture is finally catching up with the world and in another shot the bangle is dropped to represent a break away from the patriarchal shackles of society. Similarly, there is a shot where the character is seen removing a ring from her finger thus giving connotations of freedom from a relationship.The female characters are seen with their heads covered as they are wearing traditional clothing which again helps link them to the South Asian culture.

I kind of used silhouettes to draw attention to issues which are still more hidden in South Asian culture. For example, I focused on same sex relationships and illustrations of physical affection. We don’t speak about such things openly or publicly still, and there’s a need to conceal them.

Hand gestures and eyes have been used throughout to tell the stories of the characters in the video. Hand gestures are very important in South Asian culture. Hands are used to denote many expressions ranging from a welcome to a prayer. In the video hands have been used to illustrate affection, acceptance, rebellion and a break away from outdated norms.

As there’s no dialogue used in the video, i’ve really utilised eyes as a storytelling device. I feel like no matter how incredible of an actor you are or how much control you have over your face – the eyes are the most difficult to control, so they often say a lot. The eyes are used to display a range of emotions ranging from passiveness, acceptance, trust, fear and rebellion.
Also – I made sure to have an all south asian cast! Every single person in the video was from South Asia, with varying degrees of connection with their culture – whether they grew up there or their parents were there etc. But it was amazing to see them all embrace the culture and give me so many ideas and inspiration.

What is the role of the men featured in your video?

Although the festival is predominantly focused on women I also wanted to celebrate the feminine side which exists within men.  Whenever people assume that feminism excludes male issues, that’s not the case – it’s actually because it’s feminine traits that men and women are both shamed for having, and we’re fighting to celebrate femininity in all its forms. We haven’t really had a revolution for men, in the western world or the South Asian world, in the same way that woman have. They’re still strongly bound by all the facets of masculinity (which can be very toxic) and patriarchy. In the video I tried exploring the more feminine side of men – two of them were wearing makeup, while still retaining their masculinity. Also, in the second part of the video a man is seen applying a ‘ sindoor tikka’ on his forehead – this symbolises the start of something new or a wakeup call. In order to break away from the stereotypical portrayal of women it is important for the men in society to break away from archaic patriarchal norms which restrict many aspects of the South Asian culture.